Today's "legal context" article in the NYT shifted the focus of the Alito confirmation hearings from abortion to the limits of presidential power. Once again, reporter Adam Liptak offers a confusing round-up of the issues Alito will likely face in the hearings today and during the week.

The opening line of the article, however, is key when asking some later questions:

The magazine to the stars, Variety, called the New York Times’ James Risen a “journalistic hero.” In an article about the problems that Risen’s new book, "State of War: The Secret History of the CIA and the Bush Administration," might pose for the Times, Variety reporter Michael Learmonth began by offering great praise for the author: “After years of entanglement with Judith Miller, the New York Times can celebrate a true journalistic hero in James Risen, the reporter who uncovered the NSA eavesdropping story.”

“The book also indicates Iraq had abandoned its nuclear weapons program shortly after the first Gulf War, but that information was ignored by the neocons selling an invasion of Iraq. Those on the selling end of the equation had the ear of Miller, whose W.M.D. stories got most of the headlines when it mattered.”

Learmonth concluded by expressing concern for the future of this new “hero”:

“‘No matter what the greatest tyrant in the world, the greatest terrorist in the world, George W. Bush says, we're here to tell you: Not hundreds, not thousands, but millions of the American people … support your revolution,’ Belafonte told Chavez during the broadcast.”

Had it not been for coverage provided by the blogosphere (hat tip Malkin), most people would not have known that the trial of the Election Day Slashers had started today. The coverage of the trial to this point is limited to a few local sources such as the Milwaukee Journal Sentinel.

As Michelle Malkin puts it:

CBS’s Gloria Borger was so intent on tying Tom DeLay to Jack Abramoff that she “obtained” -- meaning someone with an agenda gave to her -- a very blurry C-SPAN video which she trumpeted on Monday’s CBS Evening News: "In this 2003 videotape of a convention of College Republicans obtained by CBS News, Jack Abramoff all but called Tom DeLay his hero." After running a clip of Abramoff declaring that "Tom DeLay is who all of us want to be when we grow up," Borger, as if a public official can control who praises him, ran video of Abramoff giving DeLay a hug as she charged: "Now the cozy relationship between the lobbyist and the leader has left DeLay without a top job in the House and left Republicans scrambling to keep their majority.”

Two days earlier, CBS suggested the GOP is in a “panic.” On Saturday’s CBS Evening News, just hours after DeLay announced his decision to not seek reinstatement as House Majority Leader, anchor Thalia Assuras asked reporter Gloria Borger: "So is there panic in the Republican Party?" Borger, who in her preceding lead story had described DeLay as "a brash, often uncompromising conservative," affirmed the thesis forwarded by Assuras: "I would have to say there is some panic, an awful lot of nervousness in the aftermath of this Jack Abramoff scandal..." (More in Monday’s MRC CyberAlert. Full transcript of Borger’s Monday story follows.) 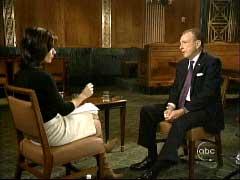 By Tom Blumer | January 9, 2006 5:29 PM EST
Howard Kurtz's "Media Notes" in The Washington Post, which is supposed to be a critique of media reporting, is very often closer to a whitewash. Today's Kurtz column is an example of just that.

After dissecting, and mostly defending, the "they're alive, they're dead" reporting calamity, Kurtz criticizes what he sees as media disinterest in on-the-job health and safety reporting:

Still Required at CBS News? To Say Dan Rather Is "Great Figure" In CBS History? 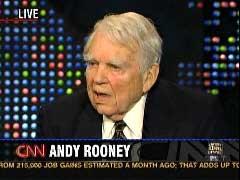 Tom DeLay’s ouster from the House leadership is the “one good thing that's come out” of the Abramoff scandal, CBS’s Andy Rooney declared Friday night during a live appearance on CNN’s Larry King Live. Asked by King about “the tapping of phones in the interest of national security,” Rooney called it “a disgrace, an absolute disgrace.

In the NYT, More Good Economic News, “But…”

This continues the Times’ stubborn insistence on putting a negative spin on good economic news, a motif reflected in the paper’s broader coverage.

Today's Washington Post chat with political reporter Shailagh Murray featured some prognosticating bravado from Murray, who insisted Tom DeLay's political career was over: "I would put my chips on DeLay not being on the ballot in November." From there, a weird questioner from New Mexico jumped in:

Borking Alito in the NYT

A piece in today's NYT by Adam Liptak has numerous holes and discrepencies (just some documented here) that can be expected from a newspaper who officially endorsed the Democrats in the last two elections.