By Brent Bozell | February 23, 2006 4:29 AM EST
Time and Newsweek put Dick Cheney’s hunting accident on their covers this week, a dying story already eight days old. The shooting victim, Texas lawyer Harry Whittington, went home after apologizing for all that Cheney had to go through, meaning the thoroughly juvenile media frenzy that followed.

Time and Newsweek no doubt imagined Cheney delayed alerting the press until Sunday so that they couldn’t put him on their Earth-changing covers last week. We’ll show you, they said, fists shaking at being so obviously dissed.

Nine months ago, CBS anchor Bob Schieffer painted Iraq as spiraling into civil war. It didn't happen then, yet on Wednesday night Schieffer renewed his ominous forecast. But unlike in May, this time his ABC and NBC anchor colleagues expressed the same prospect. Back on May 19 of last year, Schieffer teased the CBS Evening News with this unique warning: "Good evening. I'm Bob Schieffer. It just keeps getting worse in Iraq. The death toll is rising. Tension is growing between Shiites and Sunnis. Is the country sliding toward civil war?" He soon added: “Now there's been a surge of attacks on Shiite and Sunni Muslim clerics, and some fear that Iraq is sliding toward civil war.” From Baghdad, Mark Strassmann backed up Schieffer's thesis: "Tit-for-tat terror seems to be pushing Iraq towards civil war. This man says, 'We are heading toward a catastrophe.'"

AOL Once Again Jumps on the Anti-Bush Bandwagon

Not to be outdone by their liberal brethren in the printed press and TV mediums, AOL has once again loaded the web site's home page with another "We hate Bush, too!" headline, followed by those ever-present yet predictable AOL poll questions.

Following up on Brent Baker’s earlier posting on this topic, the networks are not the only ones reluctant to apply the term "partial-birth abortion" in reporting on the Supreme Court decision to review whether a federal law banning the procedure is constitutional. Shortly before 10:30pm on the February 21 edition of CNN's Anderson Cooper 360, substitute host John King discussed the issue with legal analyst Jeffrey Toobin. The term "partial birth" was referred to only twice in the segment by King, who made sure to note that it was a term used by "critics" of the procedure.

Toobin, for his part, fretted that the partial-birth abortion ban, along with parental notification laws, was part of a strategy from "pro-life forces" to "chip away" at the, apparently set in stone "right" to abortion. To Toobin’s credit, he did mention the popular support for these "later-term abortion restrictions" by the American public.

A full transcript of the exchange is behind the cut.

Wal-Mart: Always under Attack. Always.
Whether its health care, a high-paid CEO, bicycles or banking, theres no end to the medias gripes about Wal-Mart. As critics complain about the Wal-Mart effect on business competitors, the Business & Media Institute takes a look at the effect on media coverage slanting it against business.

By Herman Cain | February 22, 2006 2:00 PM EST
Wal-Marts critics, led by unions and the media, are waging an all-out assault on the free market that keeps our countrys economy thriving.

Dobbs Places Ports in a Storm of Coverage

By Ken Shepherd | February 22, 2006 2:00 PM EST
CNN program dredges up the same issues as before, but cant find an opposing viewpoint.

ABC on Execution: Sharp Contrast Versus No Contrast 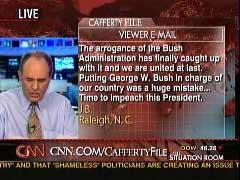 Politicians across the political spectrum are raising their voices against the arrangement which would allow a United Arab Emirates company to manage six U.S.

On Tuesday afternoon, Brian Montopoli of the CBS News blog Public Eye posted an item regarding a global-warming story that aired this past Sunday on 60 Minutes. (Hat tip: Romenesko.) Take it away, Brian:

By Greg Sheffield | February 22, 2006 11:26 AM EST
The Australian reports on a passage from a new book by terrorism expert Peter Bergen in which bin Laden's Pakistani biographer Hamid Mir recalls seeing the terror leader watching CNN.

By Rich Noyes | February 22, 2006 10:38 AM EST
With Republicans and Democrats both up in arms over the port deal with the United Arab Emirates, what are the newspapers in the UAE saying about the controversial deal? Today’s Gulf News, a Dubai-based newspaper that has an English language edition on the Web, has an article today that throws all of its fire at those in Congress who would block the Dubai Ports World from taking over operations at six major U.S.

When Progress for America tried to air a commercial with Minnesota veterans defending U.S. war policy in Iraq, they soon found their money was no good at KSTP - Channel 5. What was the offending remark in the ad that caused this censorship?

The message contains the idea "That the media only reports the bad news" and "you would never know it from the news reports, but the enemy in Iraq is al Qaeda."

This is over the line for KSTP, who believes the statements to be untrue. "That, says [General Manager Rob] Hubbard, is plainly false. He points out that both KSTP and ABC, its parent network, have reported on the Iraqi elections, progress concerning reconstruction of the country, and the reopening of its schools--all of which qualifies as 'good' news. 'When someone is watching our news, we're "the media."' Hubbard explains. 'We know that [the claim in the advertisement] is inaccurate as it relates to us.'"

Apparently they believe it is inaccurate as it relates to all media, because the commercial never mentioned KSTP. I looked through the KSTP Web site to see all these examples of reporting "good news". I couldn't find a single story, perhaps they could point us toward some of this work. For instance, an article about the Iraqi elections opines: