Today's Chicago Tribune story on a group protesting Republican Congressional efforts to curb social spending identifies Rev. Jim Wallis as a "Christian activist."  The article reports he is a leader of "a Christian social justice group" and speaks of "Wallis and other progressive religious leaders."

Remember all those media claims that race was a factor in the federal government’s “slow” response to Hurricane Katrina? Well, according to information released by the Louisiana Department of Health and Hospitals, whites died as a result of the devastating hurricane at the highest rate of any race living in New Orleans when measured as a function of population percentages.

As reported by Nathan Burchfiel of Cybercast News Service (hat tip to Drudge):

“According to the 2000 census, whites make up 28 percent of the city's population, but the Louisiana Department of Health and Hospitals indicates that whites constitute 36.6 percent of the storm's fatalities in the city.

By Greg Sheffield | December 15, 2005 3:43 PM EST
CNN's Anderson Cooper reported that he went on a patrol with troops in Baquba, north of Baghdad. After it was all over, one soldier said to him, "Sorry it wasn't more exciting for you."

Cooper said that he "told him I wasn't looking for excitement, and in fact, I was glad the day unfolded as it did."

A Memo Which Should Be Required Reading for Reporters

The reconciliation bill would reduce the 5-year growth of entitlement spending from 39% down to 38%. Spending would still increase.

Hit by a Clue-by-Four

By Mark Tapscott | December 15, 2005 12:51 PM EST
Two weeks of vociferous criticism from homosexual activists not only succeeded in backing Ford away from its recent decision to restrict advertising some of its products from gay publications but forced the automaker into expanding such marketing efforts and all but begging for forgiveness for being politically incorrect on the issue.

The cave could not be more complete, according to this description in The New York Times:

By Greg Sheffield | December 15, 2005 12:28 PM EST
Washington Post Associate Editor Robert G. Kaiser conducted an online chat with readers. A questioner from Toledo remarked that it is "amazing to see the variety of locales people are writing from, and the diversity of opinion in a relatively liberal newspaper."

Embedded Reporter on Iraqi Bad News: "Everything I Thought I Knew Was Wrong"

By Lyford Beverage | December 15, 2005 11:47 AM EST
Margaret Friedenauer is a reporter for the Fairbanks News-Miner, and is currently embedded with the 172nd Stryker Brigade in Iraq. In addition to whatever reporting she's producing for the newspaper, she's also blogging her experiences. Yesterday, she put up an interesting entry on "The view from on the ground" which was enlightening in ways she intended, and also in ways that I don't think she intended. It dealt with the situation on the ground in Iraq, and the comment she had was that "everything I thought I knew was wrong." 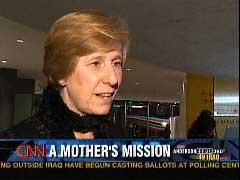 As reported by Brent Baker in today's CyberAlert, on December 13th, during the second hour of Anderson Cooper 360, CNN highlighted Cindy Sheehan's trip to England, where she traveled to spread her anti-war message.

Forget about how cold it is outside — according to ABC, there’s no longer a debate about global warming: manmade greenhouse emissions have put Earth “under non-stop stress from the heat,” with deaths from global warming “conservatively” estimated at 150,000 per year.

In a stupendously one-sided story that aired on Thursday’s “Good Morning America” — a longer version of which will be shown tonight on “Nightline” — reporter Bill Blakemore announced that unless “serious greenhouse gas emission cuts” are underway within the next ten years “the Earth will start to experience temperatures higher than it has known in half a million years.”

Such cuts in emissions, however, would cause massive damage to the world economy. Financial columnist James Glassman recently highlighted a study from the International Council for Capital Formation which tried to assess the impact on just four European countries – Germany, Spain, the UK and Italy:

Washington Post TV writer Tom Shales, fresh from defending TV news no matter how wrong it is (as in Mary Mapes), is fussing this morning that Terry Moran had the unmitigated gall to question the TV coverage of Iraq as less than three-dimensional:

Continuing a mini-trend at the New York Times of downplaying Holocaust denial among Middle East leaders, Thursday morning brings this headline to a Page 5 story regarding the latest anti-Semitic rantings of Iranian president Mahmoud Ahmadinejad: "Iran's President Clarifies His Stand on Holocaust: It's a European Myth" The Iranian leader called the Holocaust a "myth" used by Europeans to create a Jewish state. 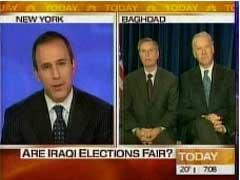 While sugarplum fairies dance in other heads, Matt Lauer dreams of US withdrawal from Iraq and envisions democracy in Iraq as having negative consequences for the United States.

As reported here, Lauer set the stage earlier this week, couching Today's coverage of the then-impending Iraqi elections largely in terms of their potential for troop withdrawal.

New York magazine's Meryl Gordon captured the end of Ted Koppel's arrogant reign over "Nightline," and Koppel grew especially cranky (he "drips with contempt") when asked about the Bush administration's public relations on the war in Iraq.